My Husband, The Taxi Cab and Even the Dead Have Secrets

Authors are privileged. Writing is a passion and we are blessed indeed that we are able to share that passion with others. However, the writing life is not without its problems. Moments of serendipity and epiphany are rare. Writing is a lonely business and facing your computer all day long without any-one around can lead to fairly bizarre monologues, not to mention the occasional episode of outright hallucination.

But it is not so much the writing as the publishing process, which is the test. Bring together a group of authors, open a bottle of wine and some searing tales of publishing woe are bound to follow. These usually have to do with the publicity - or rather lack of it - given to the novels of less well-known authors. Publishers reserve their publishing dollars for the latest Clancy or J.K. Rowling. For us lesser scribes the logic of this strategy is a little hard to follow although, admittedly, there probably is still the odd nomad in outer Mongolia who hasn't heard of Harry Potter and who needs to be informed...
My husband, bless his heart, decided to take matters into his own hands. Ever since he was a little boy, Frederick had dreamed of owning a Ferrari, an Aston Martin, a fire truck and a London taxi cab. The first three have as yet eluded his grasp, but a year ago his fantasy of tooling around London in a handsome black sixteen year old Fairway, became true. Not only did he derive great enjoyment from driving down the bus lane illegally and waving airily to would-be passengers trying to flag him down, but he also had the satisfaction of knowing that he was making a contribution to furthering his wife's career. On the doors of the cab were reproductions of the covers of my first two books. 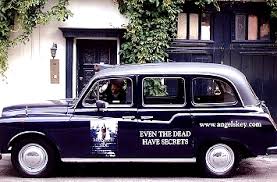 Even the dead have secrets it proclaimed mysteriously on the back left-hand door. The catchy slogan, You will never listen to the world the same way again, was stencilled on the other side. Whether this exposure led to an increase in my sales is debatable but the cab certainly drew some appreciative - if slightly mystified - glances from passers-by.

Sadly, the cab has since been sold: parking problems becoming too onerous. Added to this, I had to ride in the back (no passenger seat next to the driver) and my husband had developed the annoying habit of simply closing the little window behind his head whenever we had an argument and he was tired of listening to me. 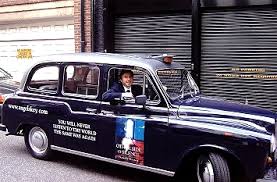 Before the cab left my life, however, we took some pictures. They are posted here and I hope you enjoy them!