Years ago, I read an interview with Dame Barbara Cartland. As I have never read any of Ms. Cartland's novels, I cannot comment on her work, but two things about the interview struck me forcibly: the lady's work ethic, and her pale blue velvet sofa. Ms. Cartland wrote more than 700 novels. I manage to finish a novel every two years. Ms. Cartland dictated her books to an assistant, while lounging in a silk gown on a pale blue velvet sofa. I have no assistant and no silk gown but these things matter not. It is the sofa I covet.
I mean, think about it. Who has a pale blue velvet sofa in their living room? It is demurely decadent. More than a little unpractical. Frivolous and glamorous. And at some deep level it confirmed my suspicion that other writers lead far more interesting lives than I do.
I sometimes receive emails from readers asking me what my day looks like. Let's just say, it is a walk on the tame side. My working day begins shortly after I have made my husband a cup of tea in the morning (around 5.30) and it ends when I make him dinner. In between these two highpoints are squeezed in roughly nine hours of writing and research. I write creatively every day except weekends although this is now starting to change and my Saturdays are becoming writing days as well. What exactly do I do in those nine hours? Well, I type. I stare at the screen in quiet desperation. I wrestle with the hero of my book, who is often disappointingly lazy and inarticulate. I eat Haagen Dazs Belgian chocolate ice cream from the tub and I melt Marks and Spencers shredded Mozzarella cheese in a microwave and eat it straight up. I know, disgusting. I'm sure Ms Cartland insisted on Earl Grey and cucumber sandwiches. When I can't stand it any longer, I go to the dojo and kick a bag or punch my trainer, Carlos. Before you give him the sympathy vote, he is a former WKA European light-heavyweight kickboxing champion and can take care of himself.
Surely it must be different for other authors? Think of Bruce Chatwin exploring far horizons; Hemingway wrestling bulls and doing manly things; Ann Rice ferried in a hearse through the streets of New Orleans; Bret Easton Ellis, OK...let's not go there. But the point is, these authors obviously required more than ice cream, a punch bag and a room of their own to write. They needed adventure, bull runs and designer clothing to keep the creative juices flowing!
It was therefore with trepidation that I accepted an invitation by Dan Crowe, former editor of the literary magazine, Zembla, to contribute to a book called How I Write: The Secret Lives of Authors. I was also thrilled, of course - how could I not be? I would be rubbing shoulders with A.S. Byatt, Jonathan Franzen and Joyce Carol Oates. Am I cool, or what. But my apprehension was acute. Sixty-four of us were asked to contribute an essay on something we consider to be essential to our writing lives: something we simply cannot do without. It could be anything - an object, a memento, a ritual - anything, which helps us arrange words on a page. I was convinced my fellow authors would be writing about Cristal champagne, yoga in the desert, smoky jazz bars, balloon rides at sunrise. Not Haagen Dazs and stringy cheese.
So what does inspire my illustrious colleagues? Hot showers (Jane Smiley), chocolate (Douglas Coupland), post-it notes (Will Self), cigarettes (Anthony Bourdain), a large desk (Alain de Botton). Good grief, their lives are as boring as mine. Seriously, all the contributions in this book are wonderful and written with imagination and flair – Nicholson Baker, e.g. manages to make ear plugs seem almost unbearably sexy – but they do bring home one inescapable truth: to be a writer, you have to be able to sit in a chair.
My contribution? I decided not to go for the mozzarella cheese, but I did choose my trusty boxing aid. No, not Carlos, but a speedball, which is attached to the wall in my office. It has a potent, plum-like shape and it beckons me several times a day. When my brain is sagging and slumping, I tap out a triplet beat and then no more sagging and slumping but swaying and spinning...
Is not the brain shaped like a pair of boxing gloves?
How I Write: The Secret Lives of Authors is published by Rizzoli and is now available (see below). Edited by Dan Crowe. 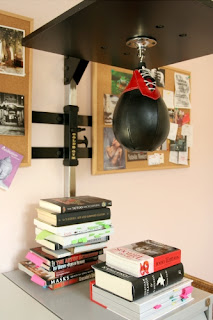 How I Write: The Secret Lives of Authors: 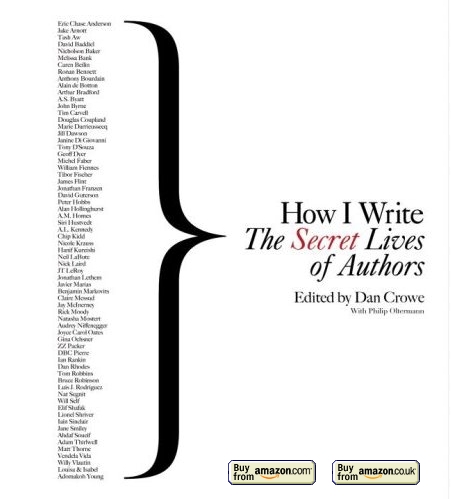