Just a quick report back on my talk last night at the Richmond Literature Festival. Thanks to all of you who sent me messages of support and good wishes ahead of time. They cheered me considerably!

As I mentioned in a previous blog, I was nervous about this one. The Richmond Literature Festival draws some big names and I was wondering how I was going to entice people to come to my event when authors of the calibre of AS Byatt and Fay Weldon are also on the programme. Not to mention Martin Amis who will be wowing an audience at his event tomorrow. Amis made headlines here in London only recently after criticising British readers for spending their credit crunch pounds on Jordan's book instead of supporting authors more worthy. Jordan, for those of you on the other side of the Atlantic, is a British celebrity known for her impressive -- but fake -- assets (she even named the dynamic duo). How on earth, I thought, was I going to get people to come to my gig if Amis beckons only a day later?

On top of this, the weather turned apocalyptic. We're talking floods. 70mph winds. Torrential rain. I believe an ark was seen floating on the Thames. I fully expected to face a room filled with empty chairs. I even worried my loyal band of friends who always turn up for these events may balk at braving the elements.

But it was a lovely evening! People came and one wonderful MySpace friend even drove for seven hours through horrendous traffic and billowing winds to support me. Good karma is his in the next life. The organisers of the event contacted me a few days ago asking if I would please bring props to reinforce the "cooky, crazy, creepy tenor of the night's proceedings." (Their words.) I have a wonderful Bride of Frankenstein Halloween outfit and was getting all excited about this idea, but sadly, my husband vetoed it. In the end, though, props were unnecessary. Located in Twickenham, the Octagon Room at the Orleans House Gallery, is set in preserved natural woodland and driving from the entrance to the house itself is quite spooky – all dark, looming trees and wet leaves on the mossy ground. The room itself is baroque and was built in 1721. It is gorgeous and was the perfect venue for an evening of fantasy, supernatural and gothic. The vibe was good and the audience friendly although I did have one gentleman in the front row who asked deeply erudite questions and who told me afterwards that this was his first literary event and he only came because his wife made him :happy

I've attached two pictures for you – not great pictures, in fact rather terrible – they were taken by my husband on his iphone. I don't know if it is the photographer or the phone that is at fault but I hope it will at least give you an idea of how very pretty the room itself is.
Thanks again for your good wishes. Stay warm and dry! 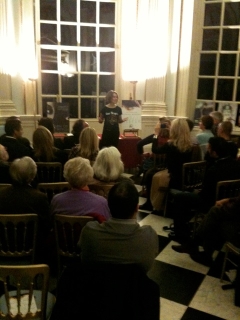