Hi everyone,
Well, here it is. This is the cover, which Dutton has chosen for Keeper of Light and Dust and which will appear in a book store near you come April: 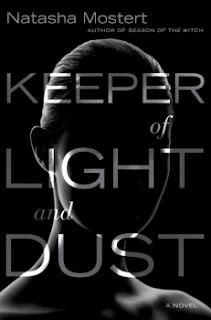 Thank you all very much for your feedback. It was an interesting experiment! I received comments from MySpacers, the members of the discussion board on my website www.natashamostert.com, and I also asked for feedback from people offline.
As I expected there was a split along gender lines, but not as sharp as I had imagined there would be. The great majority of men chose the cover above, although there were some guys who professed to being rather smitten by the pink girl in the cover below: 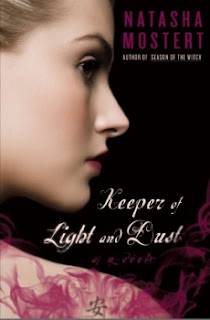 My publishers always tell me men don't read (??) and that writers have to target - and please - the female readership.
They should therefore be happy when I tell them that the black cover seemed to have met with approval from the majority of the women in my mini poll, as well. However, many women didn't like it at all and the pink cover received almost as many votes as the black. This was my publisher's first attempt at a jacket concept and at the time I liked it. However, I didn't think it was edgy enough and suggested the designer go for a little flash and ring the girl's eye with a kind of phosphorescent glow! Cool, yes? Maybe not. This suggestion did not fly and I got the distinct impression my publisher thought the idea cheesy. I then wanted them to move the tattoo from her shoulder to her cheek but that received an even frostier reception.
My publisher's second attempt was the tattooed girl and the cityscape background: 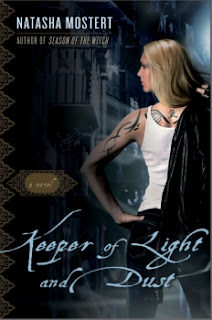 What surprised me was how few of you voted for this cover. I had thought all women wanted to be Angelina Jolie in The Wanted - and all men wanted Angelina Jolie in The Wanted. Here on MySpace there were a few takers but overall this cover scored really poorly and received some actively hostile comments from some of the guys. (We had a rather spirited discussion about this on my discussion board.)
Thanks again for participating, everyone. I am really grateful to you for taking the time. And speaking of time, I was wondering if I might impose on you again. Season of the Witch has been nominated, along with 49 other titles for the "Spread the Word: Books to Talk About" Award. The titles on the list are British but voting is open world wide as part of the World Book Day 2009 campaign. I need votes! So if you have a minute to spare, may I ask you to please go to the Spread the Word website (see details below) and vote for yours truly? Thanks to all of you who have already voted for me. Very much appreciated indeed. I would also be in your debt if you could spread the word to other people who may be interested. The organisers are encouraging people to place links to their blog pages and websites and to leave a comment along with their vote. However, a vote alone will do nicely.

www.spread-the-word.org.uk
Until next time! Take care.
Posted by Natasha Mostert (Author) at 10:39