Hope you guys are all doing well and not suffering too badly from holiday withdrawal symptoms. I am still in South Africa but I have started work myself this week -- not easy with a blue sky, beautiful mountains and lush vineyards outside my window. 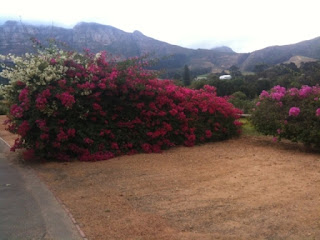 Close to my home in Stellenbosch
As I mentioned in my previous blog entry, this had been a special Christmas for me. It was the first time in seven years that I had both my brothers in the same room when we opened our Christmas presents. It was also the first time my adorable six year old nephew, Carl, visited South Africa. When my brother and sister-in-law first told me they were thinking about braving the marathon flight from the United States to Cape Town I was delighted, but dubious. After all, nineteen hours in coach with a six year old is enough to make gladiators weep. But my family is made of stern stuff! They arrived -- if not exactly sprightly -- emphatically ready for adventure.

This being Africa, Carl wanted to see animals. The big five! Not easy to arrange as most of the game reserves are in the north of the country, but we managed to do something pretty cool for the little guy, anyway. Close to Stellenbosch is the Cheetah Outreach Program, which is helping to ensure the survival of free-ranging cheetahs. Sadly, cheetahs are endangered. They are not only the target of poachers but because they do not roam in prides like lions do, they are at a natural disadvantage in the wild.

A female cheetah is like Greta Garbo - she vants to be alone. She raises her cubs on her own, without the help of a male protector. (Male cheetahs are party animals and stay with their male siblings for the duration of their lives.) Because of its magnificent speed, a cheetah is usually able to outrun its prey but then often cannot defend its catch against the much bigger lions who wait around for it to do the work before moving in and taking the kill for themselves. Some lionesses also have the horrible habit of waiting until the cheetah female starts to hunt, before deliberately searching for the unattended cubs and biting them to death. Nature at its least pretty.

When we arrived at the Outreach Program we were required to disinfect our hands and the soles of our shoes. (Inbreeding has given the animals vulnerable immune systems.) We then walked around watching cheetahs do cheetah things - yawning, strutting, butting heads, looking beautiful and aloof - but surprisingly little running despite there being ample space for them to roam. I was surprised to learn from the wardens that cheetahs don't really like to run. If I were the fastest land animal on earth, I think I would have found it tough to keep myself from constantly showing off, but apparently cheetahs will only reluctantly break into a sprint.
The first part of our visit took place behind the safety of a chainlink fence, but then we were taken inside an enclosure with one of the animals. This is a picture of my brother and Carl making friends with Joseph. Isn't he gorgeous? He is seven years old and has such presence. This is a guy who knows he is the most fabulous thing around. 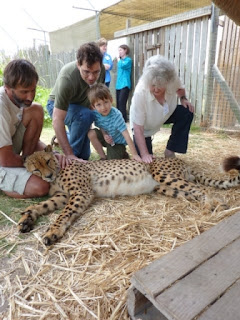 Carl with Cheetah
The gentleman holding Joseph's head is his handler and it is his task to keep Joseph happy and, I would hope, well-fed. Most cheetahs will not take kindly to being petted and do not wish to interact with their human admirers. However, every now and then you will find a cheetah who gets along well with humans and who adores being stroked. Joseph is one of them but he always has the option of getting up and leaving if he feels bored. He will also never be forced to submit to being handled if he doesn't feel like it. Most of the time, it seems, he does feel like it. When you stroke him, his purr sounds like distant thunder. Before we were allowed to approach him, we were given instructions on how to touch. Strong, firm movements are required as Joseph finds hesitant strokes irritating (and may mistake them for flies) and could just swat at you in annoyance if you don't get on with it.

Carl had a fantastic time and the rest of his visit was equally successful. The only disappointment was that we were not able to take him to the top of Table Mountain. This was high on his wish list and we had scheduled the visit for the day before he was due to fly back to the States. Sadly, on the day itself, we woke up to find Table Mountain shrouded in cascading clouds and the cable car lift closed. We had to explain to Carl that the devil and his opponent, the scowling Dutch sea captain, Van Hunk, had once again lit their pipes and were trying to outsmoke each other in a weird macho contest that has been going on for three hundred years. And even though we may not have made it to the top, we did spend time on the Eastern slopes of the mountain at Kirstenbosch Botanical Gardens. 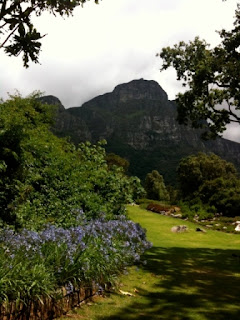 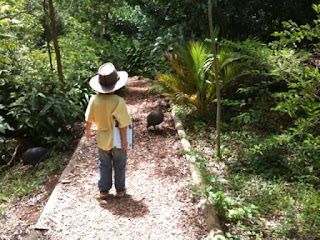 Carl in Kirstenbosch
Home to only indigenous South African plants, Kirstenbosch is arguably the oldest botanical garden in the world. To my mind, it is the most beautiful place on earth. When I die, this is where I would like to have my ashes scattered.

And on this rather pensive note, let me hasten to wish you all a wonderful 2010! May the next decade bring a world that is peaceful, creative and tolerant. And let's have some serious fun while we're about it!