CAREFUL, OR YOU'LL END UP IN MY NOVEL! 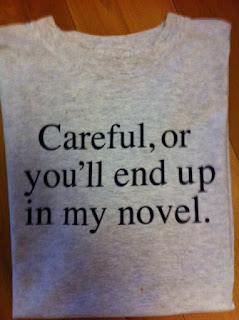 A while back I was given a T-shirt that says CAREFUL, OR YOU'LL END UP IN MY NOVEL. I smile every time I look at it, but the truth is, I have not had the guts to wear it in public as I don't want to scare off my friends. I use it as a sleep shirt, along with another T-shirt that says GODDESS. I also don't want my friends to break out in uncontrollable laughter.

The question of whether authors should censor themselves and rule relatives and friends off-limits when they write their books, is an old one. How-to-books always advise beginning writers to write about "what they know" (not something I believe in but that's a topic for another discussion), so maybe it makes sense to write about "who you know?" After all, building a believable character is one of the most difficult tasks facing a novelist.

Truman Capote, the darling of New York Café Society, was ostracised by his friends after an early chapter of his novel Answered Prayers was published by Esquire magazine in 1975. The very people who celebrated his talent, his acerbic wit and charmingly malicious prose, found it intolerable that he exposed to the world their secrets shared with him over quiche and champagne. Capote professed himself baffled by their fury. "What did they expect?" he is quoted as saying. "I'm a writer. I use everything. Did all these people think I was just there to entertain them?

Answered Prayers was never finished and Capote did not continue as a writer. Whether this was due to his addiction or to the fact that he had been shut out of the society circles in which he loved to travel, isn't clear. But Answered Prayers does function as a cautionary tale to authors who decide to write into their manuscripts flesh-and-blood characters.

Of course, all writers will make use of tics, flaws and habits they observe in people they know. But most writers will combine these in such a way that a new character takes shape - a composite of several people - and then add some imaginary qualities as well. It is probably wise not to name a character after a relative or close friend unless they have a great sense of humour. I read somewhere (can't vouch for the accuracy of this anecdote) that Stephenie Meyer named Heidi, a character in one of her Twilight novels, after one of her sisters. From what I understand, Heidi is a vampire who dresses as a prostitute to attract humans for the Volturi to eat.

My own mother had a thoughtful cast to her brow when she read my second book, The Other Side of Silence. The mother figure in this novel, a woman called Klio, is a talented musician (my mother is a talented opera singer); she is charming (my mother is certainly charming) and she is gorgeous (my mother did modelling in her youth and is still beautiful). But Klio is also thoughtless and reckless and she hears noises in her head. Eventually these noises drive her to run screaming into the wilderness where she disappears and dies alone. At the end of the book there is a poignant scene where her bleached bones are discovered in the African veld. My mother -- slightly taken aback by all of this-- found the fact that I had dedicated this book to her sweet, but not exactly reassuring. In vain I pointed out that Klio has blond hair (my own mother is brunette) and that any resemblance must therefore be coincidental. My Mum remained dubious.

For my third novel, Windwalker, I created a doctor as a supporting character and I will state without being coy that he is, in fact, inspired by a real person. The doctor is based on a childhood friend of my husband's - a brilliant man who everyone thought was going to be South Africa's next Christiaan Barnard (a fact I mention in the novel as well). Instead he decided to leave South Africa and make neighbouring Namibia his home where he does wonderful work in a very, very tough part of the world. When we visit him, we have to take a prop plane from Walfish Bay and sputter our way across the inhospitable dunes of the Namib Desert. In my novel, he is portrayed extremely sympathetically - if not heroically. However, I did add an imaginary flaw. In the novel, he succumbs to alcoholic binge drinking once a month. I am happy to say the real life friend took this in his stride and gave me his (amused) blessing.

And then there are authors who like to build characters based on themselves. Tom Clancy has admitted in interviews that Jack Ryan - the intrepid, courageous, and handsome hero of Clear and Present Danger - is his literary alter ego. Stephen King is even less circumspect and appears as himself in one of The Dark Tower books, as does author Clive Cussler in his Dirk Pitt novels. I have never written a character based on myself although I confess to having great fun endowing my heroines with qualities I wish I possessed. On a purely physical level, many of my female characters have red hair as I would love to have Titian tresses myself. My heroines are brilliant, fearless, without inhibition and supernaturally talented: they are math geniuses, remote viewers, they pose in the nude, build memory palaces and do bungee jumping. Me? Not so much. While writing Witch, I did in fact turn up at a bungee jump but when I was second from the front of the row, decided that research is best conducted via the internet. Keeper of Light and Dust is about Martial Arts and kickboxing, which is something I do - but not very well. I certainly don't have Mia's moves and wouldn't last two seconds against a villain with Ninja skills like Ash. The interesting thing about this book is that the fighters I train with in real life, all expected to feature in the novel and told me they would feel hurt if excluded! I ended up having to create composite characters with clearly recognizable idiosyncrasies.

Right, enough about that. Hope you guys are all well and that so far, the new year is treating you kindly. I returned to London from South Africa two days ago after a bumpy eleven and a half hour flight (always a lot of turbulence when crossing the equator) to a cold house and mountains of unopened mail. The fact that most of these letters are Christmas cards delivered after I had already left, only makes me feel even more melancholy. As do the Christmas decorations gathering dust on my mantelpiece. But never mind -- onwards and upwards! Below is a picture I took of the view from the living room of my Mum's home in Stellenbosch. Is it not gorgeous? 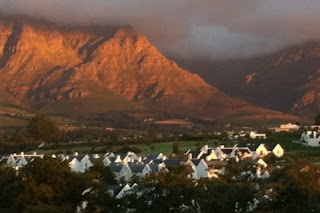